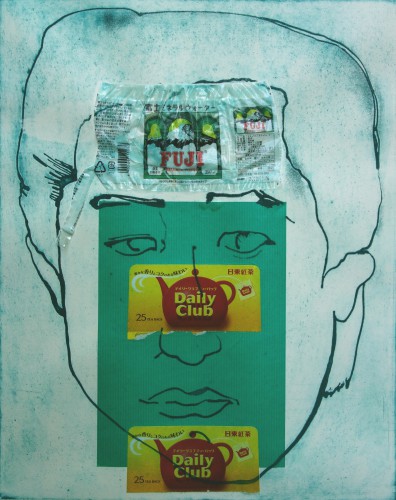 Ayaka Asano 'I wish to have a date with you'

The artist Ayaka Asano represents various feelings by combining etching prints of portraits of people she is fond of and collage of “examples of treats or small gifts”. Not gifts of the special days, such as birthdays or Christmas, but mainly modest things which people close to her gave her in daily life. She determines the base color of the work from the feelings of when she received these things and chooses a person connected to her feeling for the motif.

In the case of the work “I wish to have a date with you,” the motifs are the tea packages which her mother sent her and the mineral water label which her old classmate gave her, and the portrait of Hong Kong movie star, Tony Leung. And talking about the work “Day reward”, the motifs are the plastic bag of accessories which she bought for herself and the face of the image of the Japanese actress Yu Aoi, whom she admires. One important feature is that she uses not only portrait but also things like bits of papers for leading role in her works.

It is a seemingly sentimental production style to recall the feeling of when she received a gift using “the examples of treats” as a clue, but Asano throws her emotions by pasting things directly on to paper and putting things in a steel press machine. In this exhibition, she will exhibit works theme of which are her feelings in the past several years and also new works which are associated with Taipei and Tokyo, both of which she has visited this year.