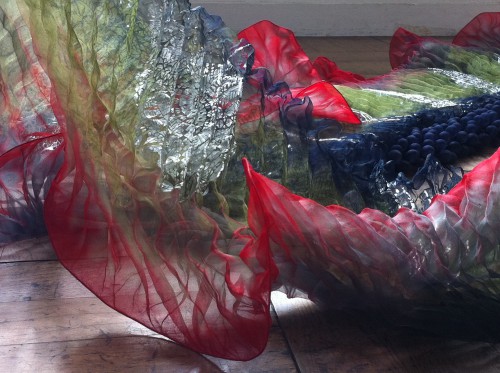 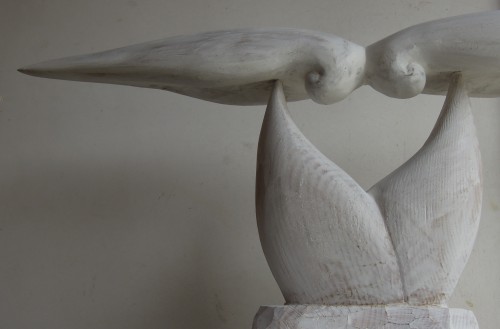 This project aims to treat the Fukushima No. 1 Nuclear Power Plant as a shrine or mausoleum by covering it with a Japanese-style roof that would function as an icon. In order to avoid any further trouble at the facility, the site of the nuclear accident, it would be safely maintained and turned into an aquatic tomb containing highly radioactive waste, such as melted fuel, that would endure for over 10,000 years in the future.
***
At present, no plans have been made for a final disposal site much less an interim storage facility, and even if it were possible to decommission and dismantle the reactor, it would be impossible to remove the large amount of highly radioactive material from the site. On the other hand, undertaking a geological disposal at the facility is not a realistic option either, in light of the nature of the soil and water that lie less than 300 meters below ground. Thus, after completing an exacting repair operation, our only recourse is to fill the containment vessel with water, and continue to safely maintain the site, regardless of the amount of labor and cost required, as an “aquatic tomb” in which radiation levels are likely to decrease over the coming 10,000 years. Reaching a degree of safety that will allay anxieties is a simple task, but guaranteeing true safety is something else entirely. The best approach is to remain vigilant and attend the reactor’s deathbed.

The most important thing is to clearly specify the existence of any danger. This could directly affect the human race of 10,000 years in the future, by which time the culture and language are bound to have undergone a variety of changes. It also includes exposing the confetti-like patterns that are painted on the deceptive stage sets that serve as the exterior walls of the reactor facility. This blue pattern seems like a device to conceal danger. Conveying the fact that something is dangerous is an important role of architecture. In order for this mysterious box of a building to function as architecture, I propose that a large wooden roof, which would act as an icon, be placed on top. It would ideally have a crowned, exaggerated, and stylized design like that of a shrine. It would be a Japanese-style roof that would respectfully serve as an icon to enshrine the souls of the departed but prevent anyone from approaching. In the city of Yonezawa in Yamagata Prefecture, stands the Uesugi Ancestral Hall, in which the feudal lords of the Uesugi clan were enshrined from 1623 to 1876. Shrines to twelve successive generations, beginning with Kenshin, the original head of the domain, form an imposing horizontal line. Facing the sea, the Fukushima Nuclear Power Plant Shrine with a total of ten mounds, including the No. 5 and No. 6 reactors, and the four mounds at the No. 2 plant, would be reminiscent of a gigantic version of the Uesugi Ancestral Hall.

In terms of engineering, the roof would protect the plant from the elements, and the steel structure that supports it would provide seismic reenforcement and a robust covering. An irimoya-style gabled roof equipped with a kohai pent roof (covering the area where visitors would normally worship) would be built on the No. 2 to No. 4 buildings (W44.93m x D44.93m [upper section: 33.93m] x H46.05m; reinforced concrete construction), which contain BWR-4-type reactors. And a hogyo-style hipped roof (without a kohai roof) would be built on the No. 1 building (W41.56m × D41.56m [upper section: 31.42m] × H44.75m; reinforced concrete construction with partial steel frame), which contains the BWR-3-type reactor that is one size smaller than the others. The dimensions of the large roof on the No. 2 to No. 4 buildings would be 82m x 75m, with a maximum height of 88m. The design is also a key factor. For the nakazonae secondary supports in  the kohai section, I would use kaerumata (frog-leg struts) with a carving of a tsunami – a common sight on Tohoku’s Pacific coast. I would also use a wave design to preserve the memory of the disaster in the ebikoryo and kashiranukibana tie beams.

The kohai section, where the Shinto priests, dressed in protective clothing, would perform rites for the reactor on a daily basis, would be located directly above the old central control room. Their most important mission would be to accurately convey memories of the accident for 10,000 years in the future. Therefore, it is vital to spend a substantial amount of labor and money on maintaining the shrine. For example, the essential cypress-bark material that would be used to finish the roof should be rethatched periodically. It would also be necessary to cultivate a forest for use in rebuilding the structure in the future. And to further ensure that memories are accurately passed down to younger generations, the site should be designated as a National Treasure, and also as a World Heritage for the negative legacy it represents. Most importantly, every available method should be used to ensure that these memories are maintained in order to pacify the malevolent gods.

As for maintaining negative legacies, one might cite examples such as the restoration of the Frauenkirche in Dresden or the frozen preservation of the Atomic Bomb Dome in Hiroshima. The method that I propose for the Fukushima No. 1 Nuclear Power Plant is a kind of “watchful preservation,” and in order to make this possible a “feature preservation” of certain aspects of the facility.
–Katsuhiro Miyamoto
(English translation by Christopher Stephens)